A Breast Cancer Survivor gets a fresh start from Jesse 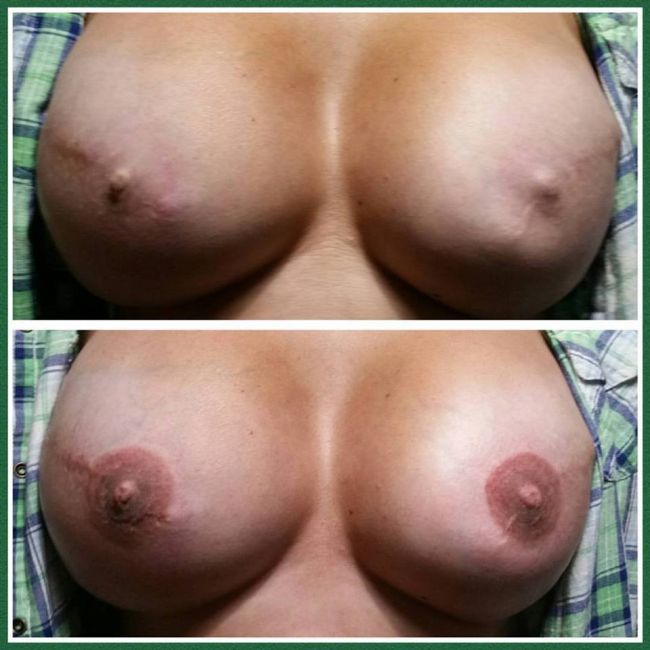 Like most straight men, we like boobs. What we don't like is, when bad things happen to them. It especially bothers us, when it's the biggest and baddest of them all; Breast Cancer. Breast Cancer is a real asshole! Everyday, it seems, we're talking with fighters, survivors, friends, and family. People who have all been affected by this disease. Scarred by it.

Any survivor of Breast Cancer will carry scars. Some minor, some emotional, and sometimes, when all else has failed, severe. A Mastectomy is the removal of a woman's breast or breasts, in an effort to completely elimate cancerous tissue from the body. In this procedure, there is no way to not leave things a mess. It deeply scars the skin, and can rob a woman of something that defines her, as her. A woman. As big hearted dopes, we can't fully understand what that means.As tattooers though, we know when someone feels good about themselves. Jesse has learned a way he can give a survivor that feeling again.

Nipple Re-pigmentation, is the process of replacing the nipple by means of tattoo. It is the last step in giving a woman her ladies back. Above is the most recent project by Jesse. This woman had a double Mastectomy and breast reconstruction, including implants. However, as you can see, she was left without the areola. The icing on the ole booby cake. A small detail, that left her feeling... "fake" and "incomplete". By tattooing them, Jesse managed to not only give her her nipples back, but also an amount of Self, that she hadn't had since the surgery. She said she now feels "Right" again. Hell yes!

To all you Fighters out. We stand with you.